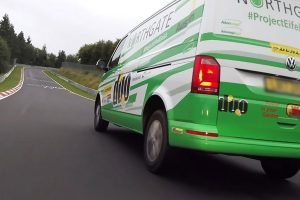 That joke about rental vans always being the fastest things on the road? Maybe not such a joke after all – as a VW Transporter supplied by Northgate Vehicle Hire has just set a new lap record at the world famous Nurburgring Nordschleife.

Used for industry testing, public entertainment and actual racing, the Nurburgring is considered one of the ultimate tests of vehicle performance, so this is no small matter.

Wait. There’s a lap record for vans at the Nurburgring?

There’s a lap record for everything at the Nurburgring, even if some of them are a bit… unofficial.

The previous van record was set by German racing driver and television personality Sabine Schmitz for an episode of the Top Gear TV programme back in 2005.

In that instance, Ms Schmitz managed to drag a Ford Transit round the 13-mile circuit in 10 minutes 8 seconds.

So what’s the new Nurburgring van lap record set by the VW Transporter?
Volkswagen is being a little cautious, and saying only that it’s an unofficial record, but British Touring Car Championship racing driver Rob Austin has reportedly punted a Transporter round in 9 minutes 58 seconds.

You can watch the attempt in the video HERE.