NEW vans and pick-up trucks hit a new LCV registrations record in 2016 – despite tailing off in December.

A total 375,687 new light commercials were registered in the year – up 1% to the highest ever level and marking the fourth consecutive year of growth, with market leader Ford accounting for nearly one in three new LCVs.

The December figure was still the second highest on record and the drop of 10.4% was against the 2015 figure for the month when there was all-time record growth of 14.6%.

The end of the year also saw a continued rise in demand for pick-up trucks, up 52.2% to 3,840 in the last month after a year of new model launches.

As the UK economy grows and commercial vehicle registrations increase, it is interesting to imagine what the industry could look like in the future. The Department for Transport has recently done some work in this area.

Light commercial vehicles made up 16% of road traffic in 2016 but by 2040 it could be up to 20%. Heavy goods vehicles made up 6% and are forecast to be in the range of 4% to 6% by 2040, reflecting increasing efficiency. Of particular note is the continued robust growth in van traffic: since 2004 this has increased from 26.9 billion miles to 45 billion, and the current forecast is that this could double by 2040. 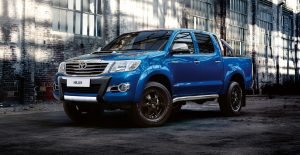